Thinking about the X trade 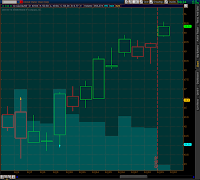 Bad trade. Started bad. Stayed that way. Not how I wanted to celebrate the Solstice.

The loss in closing my position in X was just wrong on several levels. Folly, I say. Folly!

I entered  the trade in a bearish position on Dec. 7, the day after a bear signal. From the standpoint of the technical analysis, it was a rational decision.

On Dec. 9 the stock reversed and gave a bull signal on a strong rise. Error #1 was not selling at market close on Dec. 9. My decision not to exit was based on resistance levels, a perfectly valid way of making decisions. Also, it was a net short option position, meaning that I made money every day that I held it. So, there's an added incentive not to be hair-trigger about exiting.

However, at the Dec. 9 close the stock was 4.4% away from my entry point in the wrong direction.

The rule of thumb on stop/losses is generally about 3% from entry. Any trader who goes further than that is verging on the nervy. Or possibly the clueless.

Whichever, I continued to hold the position expecting a reversal at resistance. There was a pause last week that seemed promising, and then today's breakout above  the pause level shattered all illusions.

Email ThisBlogThis!Share to TwitterShare to FacebookShare to Pinterest
Labels: X