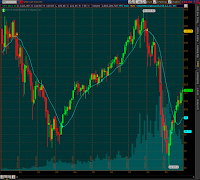 There has been much happy talk and celebration in the financial media about 2009, as blue chips (SPY) charged up from 90 to today's close of 111 for an increase of 23%.

I love parties as much as the next trader, and swoon with joy at the sight of bubbles and flying corks. But it would perhaps be good to pause and remember the realities before we all party on.

After all, this year's 23% rise follows last year's 23% loss, and since with percentages you always must work harder to gain back your losses, we really have very little to cheer about. (Basic math: A 50% loss requires a 100% gain to get back to where you began.)

Not only a year but a decade is ending. Had you bought shares of SPY on the first day of trading in January 2000, at 148, you would be down 25%. Despite all the storm and fury of a decade's worth of trading, you did as poorly over 10 years as you did amidst the smoking ruins of global finance in 2008.

Altogether, you would be showing a capital loss on the shares you bought for 67 out of the decade's 120 months.

As a smart trader, you surely would have done much better with short-term strategies, despite the cost in fees. But 401(k) administrators discourage active trading of the mutual funds they run, so we must work within those restrictions.

The chart shows as 12-month simple moving average for the decade.

If you had moved your 401(k) stocks to cash and back into stocks at the moving average crossovers, you would have traded four times in the decade, and your total gain would have been 73%.

The chart also shows the Person's Proprietary Signal, the black-box indicator that I use for my short-term trading.

If you had followed the pps signals, you would have gained 48% for the decade.

(The proprietary signal gave worse results than did the simple moving average, which was no doubt used by the ancient Sumerians to manage their barley futures. Hmmm.)

I take four lessons from all of this:

* Happiness in analyzing the markets depends upon what end-points you choose. January to December 2009 gives a great gain. October 2008 to March 2009 gives a gut-wrenching loss. So take this week's happy-days stories with a grain of salt -- they are all special pleading.

* A buy-and-hold strategy works fine in an unrelenting up market. In the 1990s, trading in and out with the moving average crossovers would have yielded much the same results as not trading out at all. In a sideways market, like the 2000s, a trading strategy is vastly superior. But, a trading strategy will keep you in the market during a 1990s-style rise.

* The sophistication or complexity of a technical indicator is no guarantee of its success, as the results of the simple moving average compared to the pps shows.

* Even a 74% gain for the decade is nothing to cheer about. That's 7.4% a year. Inflation during the decade averaged 2.8%, so your net annual gain was a mere 4.6%, less than what you would pay these days for a 30-year fixed rate mortgage. (That's ignoring interest on cash, dividends and fees on the mutual fund.)

Could you better that with short-term options strategies, where percentage gains are routinely in the double digits? Bet so.

As a trader, I can't pass up the opportunity to try to work our newfound knowledge into my short-term options perspective. Perhaps this would do.

I make the assumption that I will know by the 20th of each month where the price will close in relation to the 12-month moving average. There might be some false signals, but generally, it would be pretty clear. That assumption puts me 20 to 30 days before expiration, most months, perfect for vertical spreads. Therefore, these rules:

I haven't back-tested that method, but it seems workable.


So, party time! Pass the champagne and join me in bidding a not-so-fond farewell to the decade of the zeros.

And have the happiest of New Years! 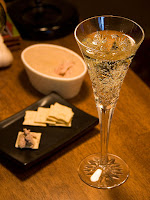 Email ThisBlogThis!Share to TwitterShare to FacebookShare to Pinterest
Labels: SPY