SemGroup Corp. (SEMG) gave a bull signal on Wednesday, breaking above its 20-day price channel at  $56.21, and confirmed it by trading beyond the channel boundary today. 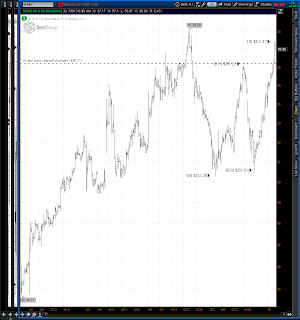 SEMG, along with most stocks, began to fall the next day, and the correction has so far carried the price to a low of $50.28 on June 4.

The question, as always when playing a correction, is when can a trader have confidence that the correction is indeed over.

In pushing to a new high SEMG has diverged from the S&P 500, which remains below its mid-June high.

SEMG is trading at around $57 with three hours plus change left before the closing bell. That's only 1.9% below the May 21 peak and presents a good argument for delaying entry on the bull side until the price has closed above the $58.08 level.

This is SEMG's second bull signal in its current leg up. The first produced a 36.7% profit over 100 days. Of the five bull signals since the current trend began in 2011, four have made money, averaging 16.9%, and the one that failed to produce a profit lost only 3.8%.

SEMG was one of two symbols that survived my initial wave of screening. (See Wednesday night's post "Friday's Prospects".) The other breakout, also the upside, was RAX. However, it had poor performance in its current leg up from August 2012, with a negative 12% win/lose yield spread, and a spread of only 3.5% since its uptrend began in October 2011.

SemGroup, headquartered in Tulsa, Oklahoma, provides services to oil companies in the Midwest and Rocky Mountain regions of the United States, Canada and the United Kingdom. It primarily is involved in transporting oil and natural gas from refineries to end users. It also makes asphalt.

The company filed for Chapter 11 bankruptcy in 2008, as the recession took hold, and emerged in 2009 as a restructured and smaller company.

SemGroup is followed by fewer than a handful of analysts, but those who do follow it love it. Perhaps its the economic macro-story that accounts for their love affair: As the recovery takes takes hold, demand for fossil fuels increases and a restructured, leaner and more efficient SemGroup will be well positioned to profit.

But that is clearly a forward-looking position that moves beyond what is known. SemGroup reports return on equity of only 4.6% from its last profitable quarter, the 4th of 2012, although long-term debt is low, at only 16% of equity.

The company has missed earnings estimates four times out of six for negative earnings surprises. It has surprised to the upside twice.

So there's no trend to earnings, and no confidence to be placed in pre-earnings estimates. At this point a fundamentalist like Warren Buffett would look up from his book (Twelfth Night by Shakespeare) and exclaim, with Olivia, "How now! Art thou mad?"

But we are chart traders here, followers of the trend and players of the odds. Madness is a virtue that courses through our veins. Let us pursue the analysis to its end.

Institutions own nearly all of SEMG shares, and the price has been bid up to where it takes $1.97 in shares to control a dollar in sales.

SEMG on average trades 440,000 shares a day, sufficient to support a moderate selection of option strike prices, but with mainly no open interest in my current front month, August. The front-month at-the money call options have a bid/ask spread of 50%.

The open interest is in the two and three figures for July with a 30% spread, but my calendar has me trading August spreads for short positions at this point.

In any case, I won't trade options that are so illiquid and that carry such a ridiculously high bid/ask spread. For me, it's long shares or nothing with SEMG.

But the options have some analytical uses. Their implied volatility stands at 25%, about the middle of the six-month range. It has been subject to wide swings as a traced a shallow rise from mid-May.

Volume on options is running heavily to the call side today, at nearly triple the five-day average. Put volume is merely 14% of the average.

SEMG next publishes earnings on Aug. 5. It goes ex-dividend in August for a quarterly payout yielding 1.33% annualized at today's prices.

Decision for my account: I'll wait for a breakout above the $58.08 level before opening a position on SEMG, and even then, I may not go there. The lack of an ability to hedge using options, the state of earnings and the sparse following of analysts give me pause. I shall, however, add SEMG to my watchlist and keep an eye on it for awhile.

At several points in my analysis I use the number 68.2%. This comes from statistics and refers to the one standard deviation boundaries, which are expected to contain 68.2% of whatever is being studied. Putting it another way, given an item (a trade or whatever), there is a 68.2% chance that it will appear within those boundaries.