Royal Caribbean Cruises Ltd. (RCL) broke above its 20-day price channel on May 21, sending a bull signal that I didn't have time to analyze at the time. I promised an analysis would come when I had time.

I've found time over the holiday weekend (what, you were expecting backyard BBQ?) and have concluded that the chart is bearish and, in fact is analogous to that of the S&P 500. That, in turn, is a platform for a broader consideration of the markets.

Consider these three charts, each covering two decades aggregated into monthly bars and framed by the Elliott wave count, and each of which can be enlarged by clicking on it: 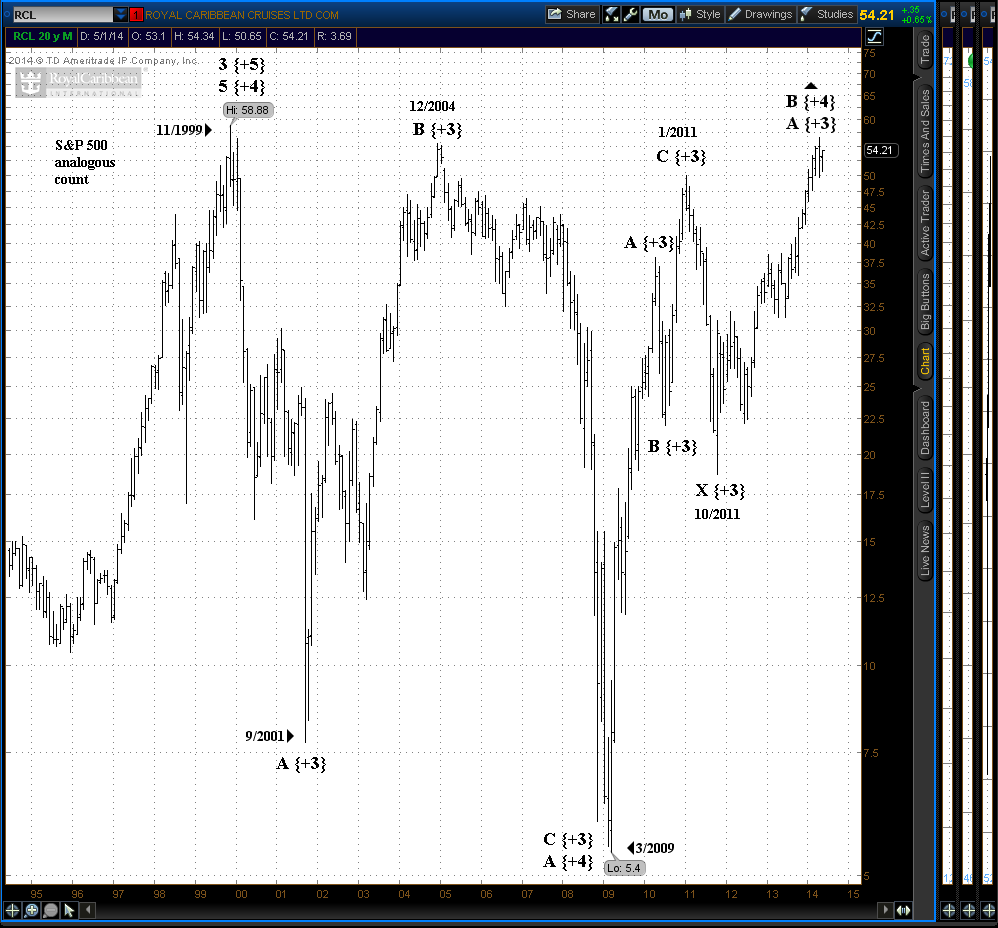 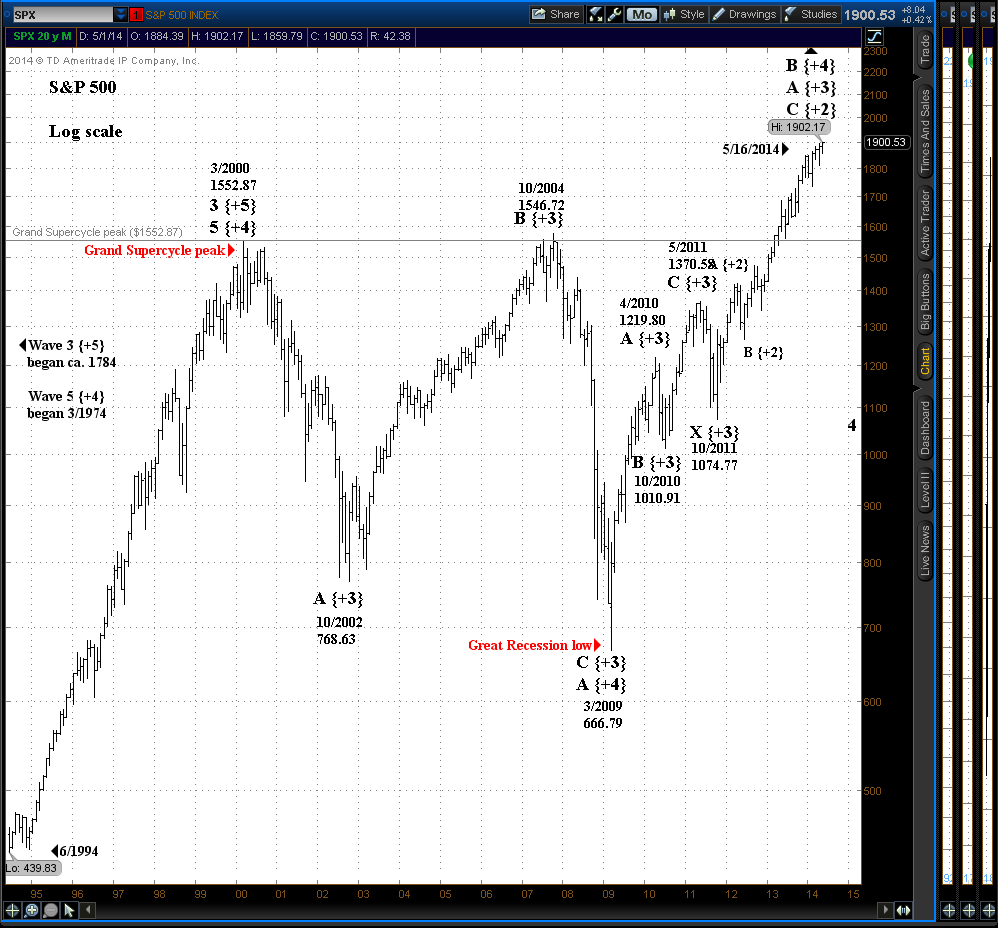 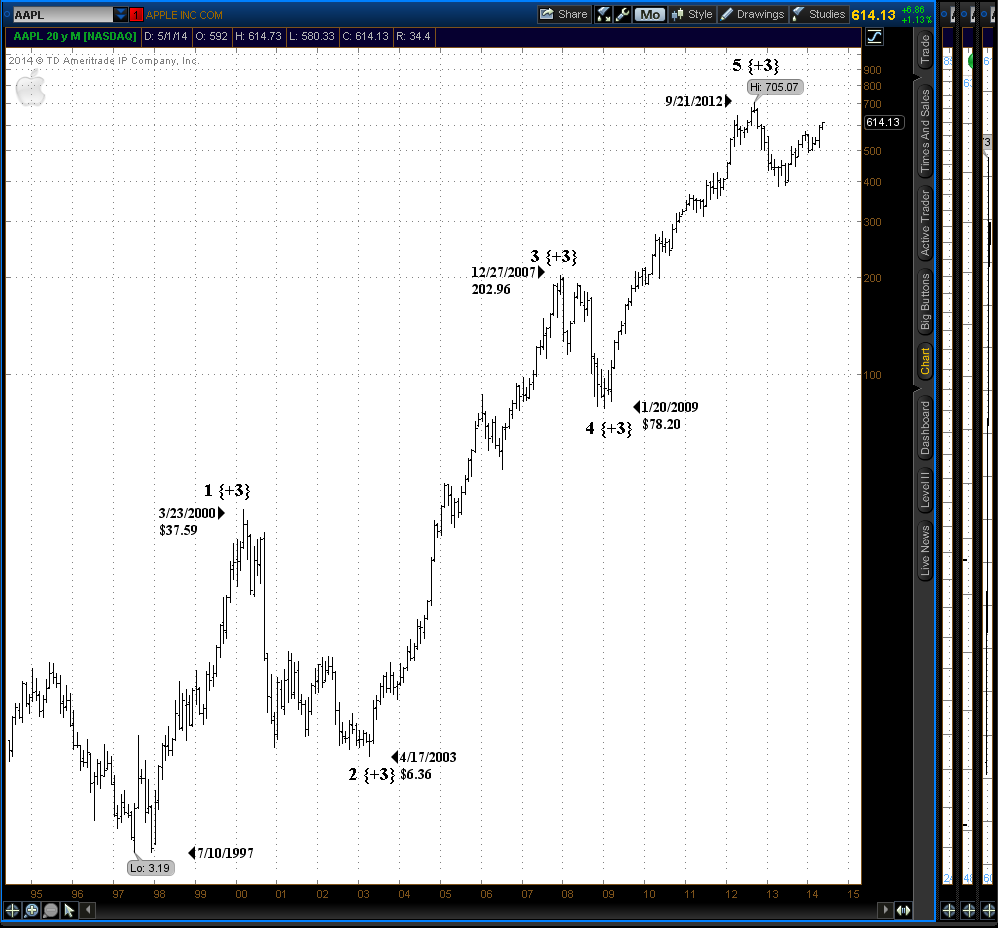 Each resembles the other in the timing of the major turning points, but the magnitude of the swings and the overall trend are entirely different. RCL and the S&P 500 must be seen as generally tracing a sideways course. AAPL has been uptrending.

And all three have fallen into what can only be seen as a bearish condition, RCL and SPX obviously so, despite the recent higher highs; AAPL, more subtly.

As I roam through the markets every day, I'm seeing these patterns repeated over and over. Some charts are analogous to the S&P 500 and are best counted as a long-term bear trend beginning in 2000. Others, like AAPL, have clearly been in an uptrend during the whole period, despite corrections.

I'm reluctant open a bull position on a symbol whose chart showed either pattern. I judge them to have greater risk to the downside than to the upside. The bearish count on RCL and SPX suggests each is due for reversal, and the AAPL uptrend, while it may set new highs, is a very mature uptrend and is on the last leg of its rise from 1997.

RCL came to my attention as a potential bull play under my shorter-term rules. SPX is a symbol that I keep track of as an indicator of the broad market and AAPL because it is a fascinating company, the ultimate story stock.

Charles Dickens opened his great novel of the French Revolution of 1789, A Tale of Two Cities, with the words, "It was the best of times, it was the worst of times," words which have been quoted so often as to elicit a groan of derision from anyone within earshot.

Yet the art and science of trading consist entirely of making decisions about what sort of times a stock or fund is in, the best, the worst, or somewhere in between. Despite their great differences, the two patterns I'm seeing on these charts have this in common: It is no longer the best of times for them, nor the worst, and that should inspire caution in any trader.

That's not to say that shorter-term profits are impossible with either pattern, but as I look at these charts, I'm seeking some indication that rising prices are in fact a new uptrend and not a sucker play within a downtrend.

I'm seeing the two patterns that I've identified repeated on the charts of any number of symbols, so perhaps they deserve a name: Call them the Blue Chip Bear pattern, typified by the S&P 500 and the RCL charts, and the Corrective Hook pattern, such as that seen in the AAPL chart. There are other patterns to be seen, with the outliers appearing more often among the smaller market caps.

Those patterns provide an opportunity for the trader. They are a shorthand to help quickly understand a chart, and that improves the initial screening of symbols in the search for a decent trade. And the patterns make it possible to formulate trading tactics that will cover a wide variety of charts.

The Corrective Hook is the easiest to deal with. It is a correction, often a 4th wave, and it will be definitely open when symbol exceeds the preceding 3rd-wave high on the three-year chart. That's a signal to consider a bull play.

The Blue Chip Bear pattern is more problematic. The symbols keep attaining higher highs, and yet if the long-term count is correct, the charts are extremely. bearish. I think the best tactic to deal with this pattern is to wait for the uptrend to end, and then correct, and then begin a new uptrend. It's a very cautious approach.

See my post "Chart Analysis: Nomenclature" for an explanation of my method for labeling waves on the chart.

No trader is ever 100 percent successful in his or her trades. Trading in the stock and option markets is risky and uncertain. Each trader must make trading decisions for his or her own account, and take responsibility for the consequences.

All content on Tim Bovee, Private Trader by Timothy K. Bovee is licensed under a Creative Commons Attribution-ShareAlike 4.0 International License.

Based on a work at www.timbovee.com.