FB: Beyond gloom and doom

Facebook Inc. (FB) is a.... Well, everyone knows what Facebook is, especially in the backwash from what has to be the largest and messiest initial public offering in history.

After 10 days of trading, FB has reached a point where I can write about it. There is a trend. There are financials. There are options. There is an implied volatility. The stuff I need is in place.


And after 10 days, the Menlo Park, California company remains mired in a tarpit of negative news coverage. Twelve days ago, people couldn't say enough good things about Facebook. Now? They find nothing but gloom and doom.

FB began trading on May 18, opening at $42.05 after a delay caused  by the inability of the NASDAQ computes to handle the load. It rose to $45 in the initial free-for-all scramble to buy shares, and then fell to $38, the level at which the stock's institutional backers jumped in to buy and provide support.

In analyzing FB, I think it makes sense to ignore the first day's trading. It wasn't a free market, really. It was anarchy at the outset and oligarchy at the end.

Real trading, orderly trading, began when the market next opened, May 21. The stock opened at $36.53 and fell, fell again the next day, moved sideways for two days, fell again, and then for the last three trading days has again been moving sideways.

FB is clearly in a downtrend but not freefall. It has paused twice in its descent, the first time fluctuating between $32 and $33, and the second time, between roughly $28.90 and $29.70, with one outlying poke down to $26.83 that was quickly retraced.

Traders who hold the opinion that FB will find a level of stabllity and then rise as the company creates value will wait for a break above the present sideways level -- call it above $30 -- before entering into a bull position.

The most cautious bulls will wait for a break above $33, or even above $37 before committing funds.

Amid all the negative press about the problems with the Facebook IPO -- the technical melt-down at the exchange, the company changing its risk assessment right before trading began and not announcing it publicly -- it is easy to lose sight of why Facebook's market debut created so much excitement.

The company's filings with the Securities and Exchange Commission routinely include a graphic: 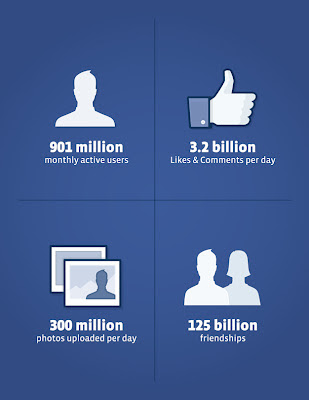 FB is a big company, dominant in its market, with a huge share of the globe's eyeballs coming to its website every day. In my case, Facebook has brought me back into contact with friends from throughout my 66 years of living, and in many cases, it's the only way I have to contact them.

Facebook rivals Google in the way it has become integrated in and essential to people's lives. In that lies immense power.

There are very few sure bets in this world. In my opinion, betting that FB's stock price will rise in the next few years is close to being a sure thing.

The only question, for me, is timing and strategy -- when and how to enter.

Facebook in 2011 had return on equity of 19%, with debt amounting to 30% of equity. That's a bit shy of growth stock territory under my standards, but it's close.

FB on average is trading 84 million shares a day, but that figure is exaggerated by the first day of trading, when 580 million shares changed hands. Volume since then has ranged from a high of 168 million to a low of 37 million.

Whatever the trading volume settles down to, FB has an excellent selection of options with high open interest and narrow bid/ask spreads.

Implied volatility stands at 59%, its highest point since trading began. The volatility has risen in a single zig-zag to reach its present point.

Decision for my account: I'm bullish on FB because of its story. I'm not willing to trade it now because of its chart. In 10 days of trading, there have only been three days where the price has closed higher than it opened. I want to see the beginnings of an uptrend before opening a bullish position. See the breakout levels I discussed above.


The high volatility, and consequent high premiums, makes FB extremely attractive as a covered call or diagonal spread play, once the decline has halted.