I use Elliott wave analysis extensively in analyzing charts. My goal is to get a sense of how mature a trend is, a sort of a "You Are Here" marker on the map to give me an idea of how much remains of the journey.

Markets are fractal in nature. Every uptrend contains smaller trends, both up and down, and each of those contain yet smaller trends. And all are structured the same, in a series of five waves in the direction of the trend, and three-wave corrections. 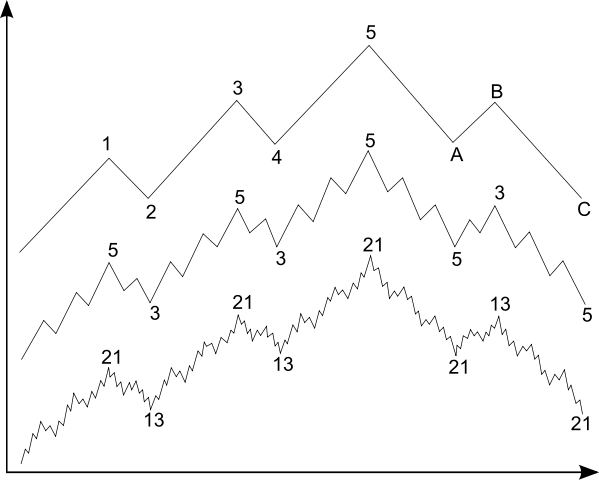 A wave's position in relation to the waves within it and the wave that contains it is called its "degree".

Leading practitioner's of Elliott wave analysis, such as Robert Prechter at Elliott Wave International, provide quite detailed maps, with many degrees of analysis and with each wave labelled to show its precise degree within a hierarchy stretching from waves lasting a century down to the jitterbugging waves of the tick chart.

The inventor of Elliott wave analysis, Ralph Nelson Elliott, provided a set a names and chart labeling conventions that are absolute. By that I mean they place the wave within the broad sweep of market history.

The wave degrees have names like "Supercycle" lasting from decades to centuries, "Intermediate" from months to years, "Minute" from weeks to quarters and "Minuette" from weeks to months. Elliott's chart labels are a melange of Arabic, Roman and lower-case Roman numerals, some surrounded by parentheses and others by circles.

They are easy to read on a chart, although the circles are difficult or impossible to produce in many charting tools.

My goals are more modest than Prechter's or Elliott's.

I need just enough knowledge of the wave count in order to engage the amazing pattern recognition faculty that is the birthright of every human brain. Once that is accomplished, I can answer the primary question posed by my analysis: Do I like this chart enough to place a trade?

I don't need to know where a wave degree stands in relation to absolute history. I need only to understand how it relates to other wave degrees on my chart, its relative standing.

And indeed, this is a reality that Prechter recognized early in his career as an Elliottician, writing, "...the precise degree is usually irrelevant to successful forecasting since it is relative degree that matters most." (Prechter, Robert. Elliott Wave Principle. Gainesville, Ga.: New Classics Library, 2005 (original 1978). Print)

With that in mind, for my analysis I'm adopting a chart-labeling system that adds an index to the wave number or letter showing its degree relative to whatever my main focus is, my Base Degree. The impulse waves, in the direction of the degree trend, are numbered using Arabic numerals, and corrective waves, using capital letters.

Typically, I look first at what Elliott would have called the Minor Degree, lasting weeks to quarters, and then branch out from there.

Under my labeling practice, waves of lower degree will carry an negative index showing how many steps away away from the Base Degree it stands.

For example, if my Base Degree is Elliott's Minor Degree, and I subdivide it into its Minuette Degree components, the Minuette wave numbers would have a -1 index.

The Minuette third wave would appear as 3 {-1} on the chart, and where subscripts are part of the available typography, it could also be written, 3-1.

If I should need to refer to the first corrective wave, the A wave, of the next higher degree, then I would write it with the wave and a positive index, A {+1} or A+1.

Waves in the base degree are written without an index: 5, B, and so forth.

A recent analysis included a chart of AAPL with Elliott waves marked. Click on the analysis, "Hey, AAPL, go bump your head", to see the chart labeled the old way. And here's the new way:


I first encountered Elliott wave analysis in 1984. In the ensuing three decades I've found them to be useful in understanding the progress of trends, but of little consequence in timing trades. Elliott tells me where I am, but not how long its going to take to reach my destination. I use other tools to determine the stock's speed and how much fuel it has left.

Elliott is but one arrow in my quiver as I fight my way through the market's Hunger Games. But it's an important arrow.

Robert Prechter's book, Elliott Wave Principle, is the place to go for everything Elliott. It contains all the theoretical knowledge a trader needs to use Elliott wave analysis, laid out with clarity in a no-nonsense style. As with any useful theory, skill comes from practical application.

Prechter's company, Elliott Wave International, has a collection of free information about Elliott wave theory and carries of suite of newsletters requiring a paid subscription, as well as books and online courses. It's worth a visit for anyone interested in pursuing Elliott wave analysis.