Update 10/15/2014: I see this is the only place in the entirety of the Private Trader corpus where I've mentioned a really bad trade that I placed in June 2012, so I'll report the outcome here. It is in an object lesson in how not to trade and the perils of the buy-and-hold approach.

We all remember how unsettled things were in 2012. Yes, the Great Recession was but a memory, and a vivid one whose impacts were still ruining lives. The Republicans in Congress were Hell-bent on shutting down the Federal Government or defaulting on the nation's debt, or both.

My thinking was that I should do a hedge against a catastrophic failure of the markets. So I bought puts in the S&P 500 index options, SPX, that expired more than two years in the future, plenty of time for the markets to correct amidst an apocalyptic failures of our political structures and markets. I never quite imagined zombies lurching through the streets look for brains to eat, but I suspect that particular nightmare was lurking somewhere in my sub-conscious.

So they haunted my account, like Banquo's ghost, soaking up buying power and sticking out as a constant reminder of how things were when I was young and foolish.

As recently as yesterday the puts were valueless. But today's rapid and massive decline finally brought them back to having some value, and I sold them for 5 cents a contract, and fell well pleased to be rid of the albatross.

My options -- simple sold puts, with the insurance that spreads can provide, lost 99.8% in value over the lifetime of the position, or 43.1% annualized.

Actually, annualized, the figures aren't too awful. But a single contract on SPX is so expensive that it is a quite a significant loss in absolute terms.

Notice that under my rules, every position is either permanently hedged or must be hedged under strictly followed rules. And notice that there is a rule for everything -- getting in, getting out, whatever the contingency may be.

As much as I hated taking the hit -- losing money in a trade is genuinely painful for any private trader -- I've learned from the experience, and the gain in knowledge and wisdom is always of far greater value than the monetary losses. 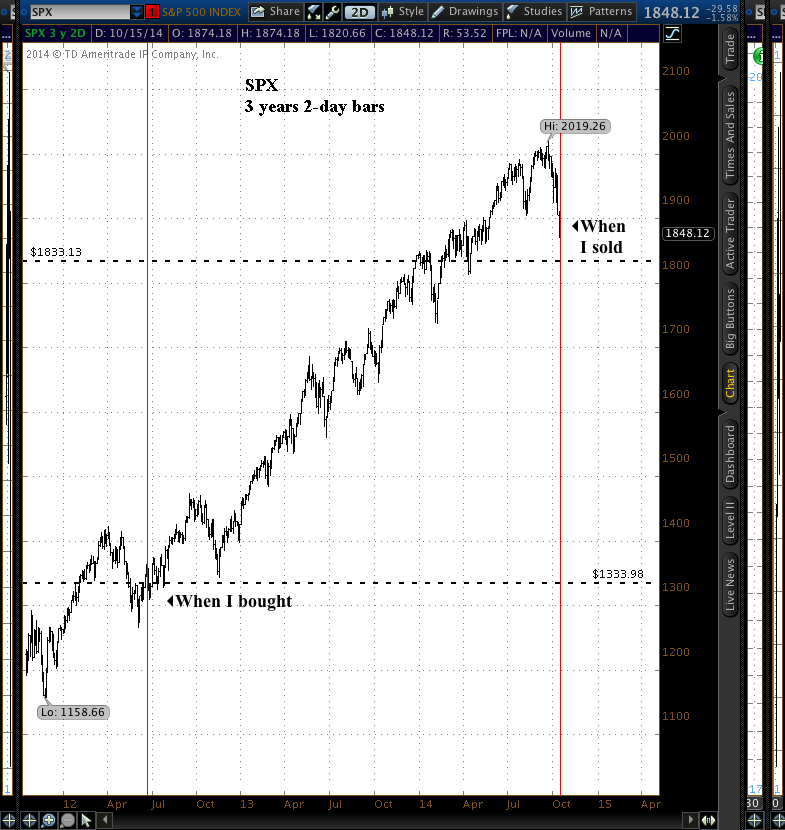 I've been scratching my head for weeks trying to figure out how to deal with December's fiscal cliff negotiations and January's debt ceiling deadline.

Last year's debt ceiling stand-off caused an 18% tumble in the S&P 500. While a move of that magnitude is far from being the end of the world, I'd sooner avoid it if I can.

Regular readers will know how averse I am to trading based on news or the expectation of events. I trade charts and probabilities, not guesses or forecasts about the future.

Absent a deal, the federal government falls over the fiscal cliff at the end of December, and the debt ceiling most likely must be resolved early in 2013, possibly in February.

Basically, the fiscal cliff/debt ceiling complex that we're rushing toward is like a huge earnings announcement, and should be treated as such. It has the capability of suddenly overturning all prior assumptions that have motivated traders, or of confirming those assumptions, or of leaving the situation mired in ambiguity.

The point is, as with earnings, I don't know which outcome to expect or how the markets will react. My crystal ball is cracked, my tarot cards were turned to pulp in a gully-washer, and when I break out my astrology books and look up to the stars, here in Portland, Oregon, deep in the American Fog Belt, I see nothing but clouds.

Now, I have every confidence that House Republicans and President Obama will reach a deal, both on the fiscal cliff and the debt ceiling. The 2011 debacle was far too damaging to the Republicans, and the most radical anti-government faction in the House was weakened by the November elections.

I'm also confident that the market has priced in a certain amount of Sturm und Drang in the run-up to the deadlines. It's the outliers that have the capacity to move markets significantly.

So here's my plan:

I'm not opening new positions until the fiscal cliff and debt limit issues have been resolved. I expect that a resolution to the December fiscal cliff will also make clear whether the debt limit remains a problem.

My present collection of December options expire Dec. 20, and I won't be rolling them over.

Positions that expire later on, I'll close them before Christmas.

I'll retain one position -- an insurance hedge of out-of-the-money puts on SPX -- the S&P 500 index options -- that expire in January 2014. If the worst happens, they'll come closer to being in the the money and give me a nice profit. If the market doesn't collapse, then no loss.

My trading rules can be read here.

And the classic Turtle Trading rules on which my rules are based can be read here.